Let me start this with a simple statement – you have not truly seen Croatia unless you have seen its National Parks, because there is no bigger beauty than the one that is preserved. 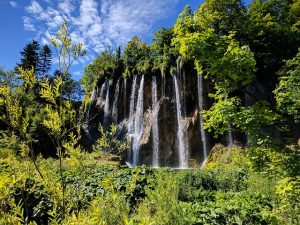 Being the largest, oldest and most visited National Park in Croatia there are some pretty big expectations that must be met, and while holding our right hand in the air we promise that your expectations will not only be met, but exceeded.

As every proper National Park, Plitvice are a home of 1267 different plant species, of which 50 species of orchids, and also for years a home of 140 types of birds and 50 mammals. Spacious forest complexes, exceptional natural beauty of lakes and waterfalls, rich flora and fauna and pure mountain air are what makes a definition of a National Park, and Plitvice Lakes have it all.

Probably the biggest reason why Plitvice lakes are on our Top 5 Croatia National Parks list are 16 interconnected lakes that cascade one into another making an unforgettable spectacle. Wooden footbridges and pathways across the rumbling water will give you a fish eye view of the lakes and the waterfalls, which will surely make your staying there even more exciting.

We will kick this off with a pretty cool fact that will make you understand why Krka River is on our Top 5 Croatia National Parks list: the hydroelectric plant Jaruga under the slopes of Skradinski buk is the second oldest hydropower plant in the world and the first in Europe, built only 3 days after the world’s first hydro power plant on Niagara Falls.

In addition, Krka River is an area of an exceptional natural value since it consists of seven waterfalls and has a total drop in altitude of 242 meters, which makes it a natural and karst phenomenon. The waterfalls crash into the deep water surrounded by a veil of scattered rainbow colored drops of water, and thanks to a walking trail that has been constructed over the river, you will be in a direct contact with colorful lights, unforgettable scents and mystical sounds.

After a pretty long yet exciting walk, you can end your day by swimming in the cold waters of the river, or you can simply kick back and spend your afternoon in a restaurant or a café that are within the park. 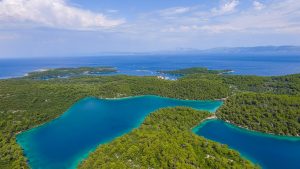 Have you ever been in a situation where you think things can’t get any better but you keep bumping into something that makes you say ‘WOW’ over and over again? Well, prepare yourself because at the Southern part of Adriatic there is an island Mljet.

National Park Mljet is a special area on the northwestern part of homonymous island. This truly amazing island has an exceptional cultural and historical heritage, and the system of the Great and Small Lakes represent a unique geological and oceanographic p

St. Mary’s Island on the Great Lake with the Ancient Benedictine Monastery and the 12th Century Church is probably the most peaceful and calming place in the world, or at least it felt like that to us. The beauty of the landscape seems to be unreal, water seems like it is perfectly still, and the nature wraps its arms around you and doesn’t let you go.

Furthermore, for those of you who are not all about natural beauties, but want a little bit of action, you can rent kayaks and bikes, or take a boat ride. There is a network of paths that allow even the most curious people to explore and access the Park on foot or bicycling.

We have set this National Park in the Top 5 Croatia National Parks because we believe it defers in a way, we believe it is for those who are seeking for a raw beauty and know how to appreciate it, so for those of you who are considering to visit Sjeverni Velebit we say – ‘Go ahead! Do it!’, and we will explain why:

The exceptional nature of the beech forests in the National Park Sjeverni Velebit is based on their originality, geographic position, age and size, and the diversity of karst phenomena and plant and animal life are only part of a special image of this natural entity.

80% of the surface of the National

Park consists of forests, and although you probably won’t see them, you will notice a presence of wolfs, bears and lynxes. Still, the greatest peculiarities and values of this National Park are hidden beneath the foot of the visitor. It is a very special world of karst subterranean forms, and the most important of them are the pits. Luka’s pit, in fact, is one of the deepest pits in the world.

When visiting Sjeverni Velebit you have to take part in hiking and cycling, but you definitively must take part in star gazing.

This rocky maze of 89 islands, islets and rocks in the sea is the most indented island group in the Mediterranean, and is a part of our Top 5 Croatia National Parks list because of its incredible underwater, and even more incredible inland.

You’ll have to make sure you find time to sail along the nautical paradise that is the Kornati National Park, and don’t forget to pack your snorkel and mask. Your interest will probably be drawn by ‘The crowns’ – the surface of a large tectonic fault that was caused by the global movement of Africa to the north and its “hammering” into Europe

We don’t want to make it seem like Kornati are nothing more than a beautiful sea. There is the other side of the medal – ‘suhozid’. Suhozid are monuments of incredible human workmanship, skill and patience. Placing a hand on construction that is generated solely by human hands causes deep respect for the painful coexistence of men and rocks.

Depending on it if you like more the woods, sea or the rivers you will make your (not so easy) decision on which National Park to visit, but keep one thing in mind – no matter which one you choose, you won’t go wrong!

This website uses cookies to improve your experience while you navigate through the website. Out of these cookies, the cookies that are categorized as necessary are stored on your browser as they are essential for the working of basic functionalities of the website. We also use third-party cookies that help us analyze and understand how you use this website. These cookies will be stored in your browser only with your consent. You also have the option to opt-out of these cookies. But opting out of some of these cookies may have an effect on your browsing experience.
Necessary Always Enabled
Necessary cookies are absolutely essential for the website to function properly. This category only includes cookies that ensures basic functionalities and security features of the website. These cookies do not store any personal information.
Non-necessary
Any cookies that may not be particularly necessary for the website to function and is used specifically to collect user personal data via analytics, ads, other embedded contents are termed as non-necessary cookies. It is mandatory to procure user consent prior to running these cookies on your website.
SAVE & ACCEPT